Lots of islanders turned out for the swim. With water temperatures of 2 degrees they didn’t stay in for long. Well done to all who participated they can now say, without fear of contradiction, that they are lunatic. It was a truly amazing day. Fresh snow, the largest waves I’ve ever seen in Surf Bay and sunshine. Some had enjoyed a tipple just before their swim they said it gave them Dutch courage. We have a Dutch team with us but not of them in sight so I assume none of them were mad enough to take the plunge. My best guess is that it was a tipple of Scottish courage. One woman wore a rather fetching ensemble of a fur coat and bikini – if there were awards for bravery combined with elegance she’d definitely be getting mine. I enjoyed being voyeuristic rather than a participant. I’ve resisted the urge to bare all and plunge into the Arctic waters in 1996, Antarctica in 2013 and the Falkland islands in 2017. Should I ever get to South Georgia I might rethink my strategy. For now enjoy some images of brave, mad and wonderful people having fun and raising money for charity. 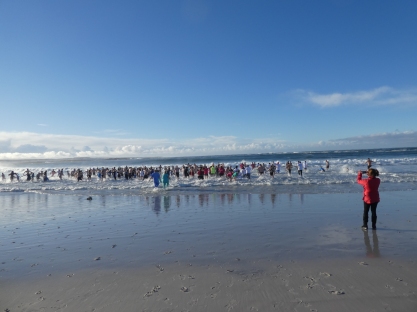 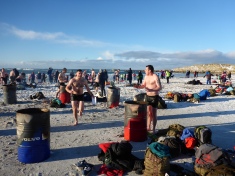