In 1992 I completed a trip camping from Santiago down through Chile to Usuaia and then back up to Rio. It was many weeks of travel and I met some wonderful friends. When I returned from the trip, which included a short span in the Amazon, I met friends of one of the guys I’d been travelling with. Quite by happenstance I met someone who would become a best friend for life, but thats another story.

I also ended up meeting people who lived less than a mile down the road from me in London. We didn’t hit it off greatly but got on well enough to spend time together in each others homes and I learnt lots from this couple. One thing that marked them out as different was their obsession with recycling. They separated everything and only threw into rubbish those things which really couldn’t be used again. It was 1992 and it was odd behaviour in my part of London.

Fast forward 25 years and I am now living somewhere I love, but which has no recycling. The only option is to bin stuff but right from the start of my trip here, I couldn’t help but start to hoard glass jars. I reasoned that I might pickle some ginger or make something that could be stored in a jar. Today someone asked for them because she’s going to make marmalade – I can’t tell you how happy I am.

In our conversation I went on to reveal that I’ve also started to hoard tins – something stops me from throwing them into the bin.  After a few suggestions from said trusty friend I’ve made my first pen pot from a used baked bean tin. Im officially now the type of person who makes things out of used tins. Luckily, Pinterest has lots of ideas so I might even end up collecting used tins from locals to use in my crafty endeavours. Actually since starting this post I’ve doubled my pot collection!

Now, a pile of card is starting to build up, so now I need a project to use up what I’ve already collected.

20+ years of learned behaviour makes it very difficult for me to throw these things out and let them go to the tip. Equally I don’t want to become someone who just hoards empty tins and jars. I’ve therefore decided to do one recycling project a week whilst I’m here. Who knows, if I make something attractive or useful enough others might follow. Will post the photos here. 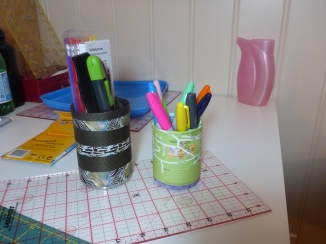 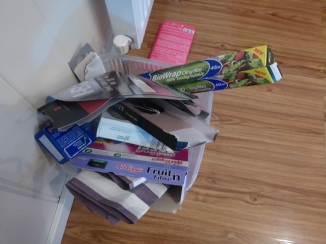