As my husband rarely reads things I write, I can talk quite freely about him here. I met John just under 20 years ago and we married in 2001. For a few months I teased that I would have a 2001 themed wedding but he didn’t take the bait. In December, it will be 16 years since our wedding and I can’t begin to explain just how quickly those years have passed. Some people say they would follow their husbands to the end of the earth but I wonder, when push comes to shove, would they really do it? Well, I did and I am living pretty close to the bottom of the world.

Before I met John I’d been single for a while and decided that it was important to make sure the next relationship would be a good one. I did what all self respecting 30 somethings do, I wrote a list of desirable qualities. There were some conditional ones, other were desires rather than essentials and could be traded such as Dancing.

Recently  we had dinner with some new friends and after a couple of games of Scrabble – we started another game which they sometimes play to get to know people.  Hopefully, they’ll still talk to us after some of the answers, but the game goes like this… a number of cardboard spoons are placed on the centre of the table and each one has a question that the group must answer. The spoon is then discarded and another is picked. The spoons sported questions such as ‘ whats the most decadent thing you’ve done?’ ‘ if you had the PM for tea what would be your first question?” ‘ Where would you most like to have a cocktail?’ and so on. Its quite revealing and you do get to learn lots about people. The question that got me thinking was ‘ Whats the most romantic thing your partner has ever done?’ Well, I could answer that and realised that I had lots of examples of John being romantic. Things like sending me a Van Morrison CD with a certain track highlighted for me to play – if you can’t guess- you’re probable not a Van Fan. Or I could have talked about the time he gave me a clutch of envelopes to take on a 10 day trip – a letter or item for each day – including some whacky things like a photo of him being silly or a photo of him and his friend Andrew covered in mud! Opening the letters on the trip was like having a short conversation and yes it was before messaging, whats app etc.

He is so pragmatic and a quiet introvert so its perhaps not surprising to be able to report his romanticism. The upshot of the game was that I couldn’t think of one romantic thing I had done for John. There are lots of practical examples but nothing stands out as ‘Romantic’. As we will soon embark on our 20th year together,  I will start with the notion that I must try harder!

So, has it all been a whirlwind of love and perfection? The polite answer is NO! At our wedding John gave the most amazing speech and I recall snippets of it from time to time. He talked about the concept of a Management Consultant and an Engineer organising a wedding and the challenges that presented. Of course he was able to report success on that occasion but we’ve sometimes encountered the challenges he jokingly referred to. Things like the Management Consultant having grandiose ideas about what can be achieved and the Engineer wanting to create a practical plan which could be implemented and delivered on budget and to time! 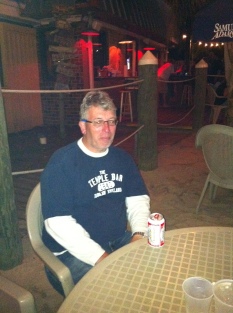 One thought on “Reader, I married him..”